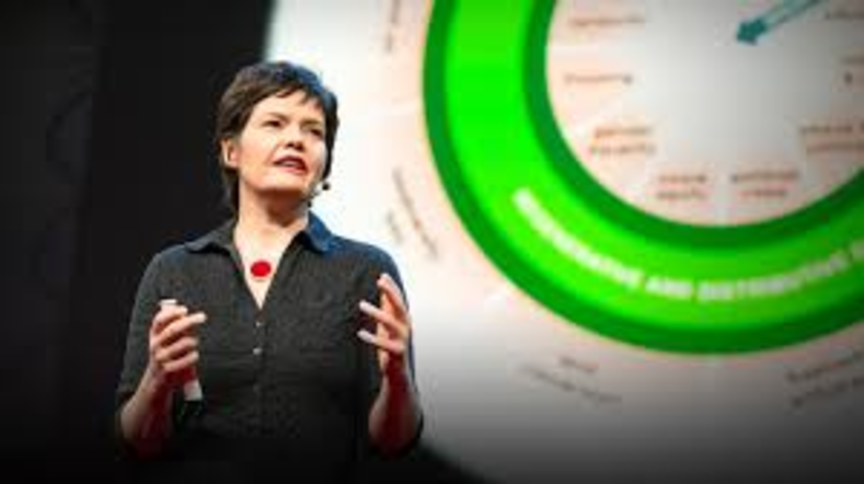 What was the nature of their innovation and how did it contribute to humankind? The term 'doughnut economics', which she understands as an economic model that balances between essential human needs and planetary boundaries. In 2017, she published Doughnut Economics: Seven Ways to Think Like a 21st Century Economist, which is a counter-proposal to mainstream economic thinking that formulates conditions for a sustainable economy. In this book she advocates reconsidering the foundations of economic science. Instead of focusing on the growth of the economy, she focuses on a model where there can be ensured that everyone on earth has access to their basic needs, such as adequate food and education, while not limiting opportunities for future generations by protecting our ecosystem. The book was longlisted for the 2017 Financial Times and McKinsey Business Book of the Year Award.

Kate Raworth´s doughnut image of the social foundations within the ecological ceiling and planetary boundaries is ground breaking - elucidating effectively complex ideas for politicians and the public alike.

'Doughnut Economics: Seven Ways to Think Like a 21st Century Economist' is the most mind-set empowering and action-provoking 'economics' book I have ever read. With its powerful, ethically and empirically appealing framework for challenging the most pressing 21st century problems, brilliantly communicated by word, image and multiple change-makers, I have no hesitation in making Kate Rayworth my first and foremost nomination for this much needed Not-the-Nobel prize.

Kate Raworth changed our perceptions, showed us what economics is really all about, and is an exciting graphic communicator for our times.

The doughnut is not anything as renegade as it is claimed it to be. It still uses the same kind of vague thinking process with a new name and topology, as the older kinds of economics thinkers did. This avoids stating, axioms, assumptions and definitions, and so naturally all its does is to make more confusion. For a scientific way of presenting the facts an hypothesis or model is necessary that is "as simple as possible without being oversimplified" (Einstein)--the doughnut is oversimplified.

An amazing and influential theory that shows the weak points in modern economic thinking - including how Western society disassociates the environment from the economy!

If we really want to understand what macroeconomics is all about (and to call it economics is confusing the main issue), we need to apply a logical and analytic approach that is similar to that used in building a system for the understanding of a flow-cycle in nature (that is for example, how rain is formed and its action on the earth). The doughnut presentation lumps it all together when we should really be trying to separate it all out.

The doughnut economy recognizes it to be multi-connected on a big torus shaped lump of dough. This is an oversimplification. My objection is that in fact in the most simple form of a fully comprehensive macro-economy, we need to consider 19 kinds of exchange activities flowing between 6 entities as an ABSOLUTE MINIMUM. The explanation is in my paper SSRN 2865571 "Einstein's Criterion Applied to Logical Macroeconomics Modelling". This model actually has 46 different kinds of money-flow circuits.

Eric van Praag “DOUGHNUT ECONOMICS” is a beautiful illustration of what Ilya Prigogine have called “dissipative structures”. The Nobel Prize in Chemistry 1977 was awarded to Ilya Prigogine "for his contributions to non-equilibrium thermodynamics, particularly the theory of dissipative structures." Nobel Lecture: “Time, Structure and Fluctuations” Copyright © The Nobel Foundation 1977 https://www.nobelprize.org/uploads/2018/06/prigogine-lecture.pdf

A brilliant book full of ideas for rerouting the economy for the 21st century.

Kate Raworth (“Ray-worth”) is a renegade economist focused on exploring the economic mindset needed to address the 21st century’s social and ecological challenges, and is the creator of the Doughnut of social and planetary boundaries.