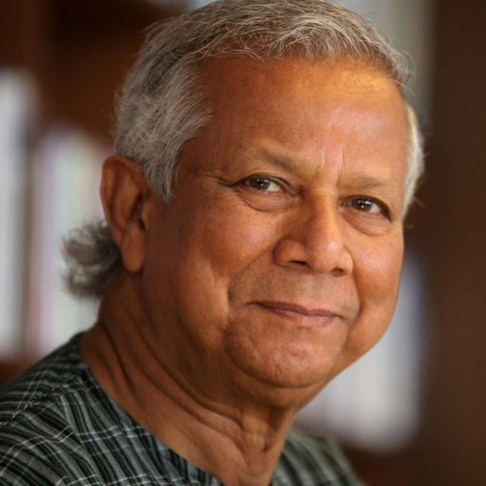 What was the nature of their innovation and how did it contribute to humankind? Professor Muhammad Yunus established the Grameen Bank in Bangladesh in 1983, fueled by the belief that credit is a fundamental human right. His objective was to help poor people escape from poverty by providing loans on terms suitable to them and by teaching them a few sound financial principles so they could help themselves. From Dr. Yunus’ personal loan of small amounts of money to destitute basketweavers in Bangladesh in the mid-70s, the Grameen Bank has advanced to the forefront of a burgeoning world movement toward eradicating poverty through microlending. Replicas of the Grameen Bank model operate in more than 100 countries worldwide. Born in 1940 in the seaport city of Chittagong, Professor Yunus studied at Dhaka University in Bangladesh, then received a Fulbright scholarship to study economics at Vanderbilt University. He received his Ph.D. in economics from Vanderbilt in 1969 and the following year became an assistant professor of economics at Middle Tennessee State University. Returning to Bangladesh, Yunus headed the economics department at Chittagong University. From 1993 to 1995, Professor Yunus was a member of the International Advisory Group for the Fourth World Conference on Women, a post to which he was appointed by the UN secretary general. He has served on the Global Commission of Women’s Health, the Advisory Council for Sustainable Economic Development and the UN Expert Group on Women and Finance. Professor Yunus is the recipient of numerous international awards for his ideas and endeavors, including the Mohamed Shabdeen Award for Science (1993), Sri Lanka; Humanitarian Award (1993), CARE, USA; World Food Prize (1994), World Food Prize Foundation, USA; lndependence Day Award (1987), Bangladesh’s highest award; King Hussein Humanitarian Leadership Award (2000), King Hussien Foundation, Jordan; Volvo Environment Prize (2003), Volvo Environment Prize Foundation, Sweden; Nikkei Asia Prize for Regional Growth (2004), Nihon Keizai Shimbun, Japan; Franklin D. Roosevelt Freedom Award (2006), Roosevelt Institute of The Netherlands; and the Seoul Peace Prize (2006), Seoul Peace Prize Cultural Foundation, Seoul, Korea. He is a member of the board of the United Nations Foundation. By establishing Grameen Bank in 1983, Muhammad Yunus sought to realise his vision of self-support for the very poorest people by means of loans on easy terms. The bank has since been a source of inspiration for similar microcredit institutions in over one hundred countries. Banks in the traditional system have been reluctant to lend money to anyone unable to give some form or other of security. Grameen Bank, on the other hand, works on the assumption that even the poorest of the poor can manage their own financial affairs and development given suitable conditions. The instrument is microcredit: small long-term loans on easy terms. When Grameen Bank was awarded the Peace Prize in 2006, more than seven million borrowers had been granted such loans. The average amount borrowed was 100 dollars. The repayment percentage was very high. Over 95 per cent of the loans went to women or groups of women. Experience showed that that ensured the best security for the bank and the greatest beneficial effect for the borrowers' families. Muhammad Yunus has also been a global leader in the development of social businesses that share a commitment to making a positive difference in the world as well as to being financially profitable. His book A World of Three Zeros: The New Economics of Zero Poverty, Zero Unemployment and Zero Net Carbon Emissions describes the many initiatives that are happening around the world towards these goals, inspired by his leadership.

He should not be in the list at all. His ride on neoclassical, false ideas to promote private microfinance could not be able to "send poverty into the museum"!! Poverty still persists, worldwide, and to add to that microfinance and global capital pushed the marginalised and poor further into "precarious" position by extracting "surplus" profit from people without ability to pay!!

He has done good work, but some of his economic ideas are problematic. For example, he writes, “I believe that ‘government’, as we know it today, should pull out of most things except for law enforcement and justice, national defense and foreign policy, and let the private sector, a “Grameenised private sector”, a social-consciousness-driven private sector, take over their other functions’. --Muhammad Yunus (1998: 214). This is unrealistic and irresponsible given the need for the state.

The important aspect of Yunus´ Grameen Bank model is that it has helped millions of people out of adverse poverty - first in developing countries and now in the poor parts of developed countries such as USA.

As the Norwegian Nobel Committee write in 2006 when he was awarded the Nobel Peace Prize, "Muhammad Yunus has shown himself to be a leader who managed to translate visions into practical action for the benefit of millions of people, not only in Bangladesh, but also in many other countries." Professor Yunus is an economist who has shown that the prejudices of bankers against the poor need not stand in the way of developing new systems of banking and credit that include the social credit.