The Importance of the Teaching Style 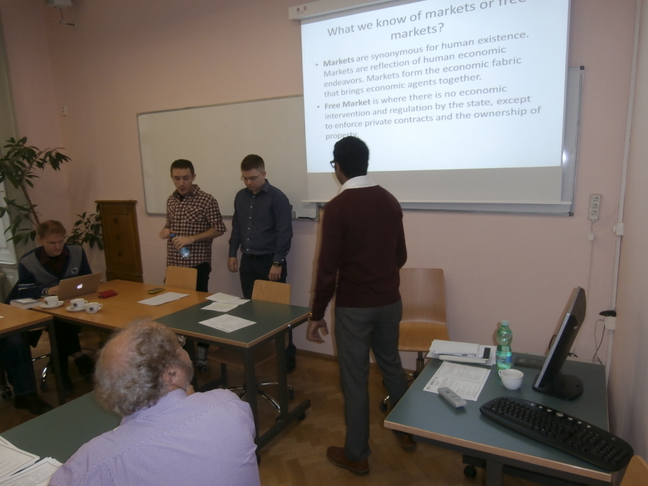 Imperial mainstream economics have a tendency to indulge in a one-way frontal teaching. I am proposing to intertwine the pluralist reforms with flexible two-way instruction, by unfolding more pluralistic interactive teaching styles propagated by Dewey, Sen or Nussbaum. But this requires to „flip“ (i.e. to reverse) the classes: first a study of fundamentals at home and then the battlefield in the class. The students´ inquisitiveness and creativity will bring the pluralism there automatically.

This proposal to intertwine two styles of teaching needs better explanation. Indeed the fundamentals come first but often they get lost in the details. (Failing to see the woods for the trees.) My working paper SSRN 2865571 "Einstein's Criterion Applied to Logical Macroeconomics Modeling" is the most basic way of starting this process.

„Battleflield in the class“ implies the flipping of the conducting button where both the teacher and the students alternate. To require a critical thinking without students´ initiative and their OWN EXPERIENCING of the pluralism misses the aim. Pluralism should be brought to the students´ minds naturally via their hands-on problem solving, team competitions defending alternatives, presentation of essays, role play and discussions. Teacher as a monopolist on pluralism is again a wrong concept.

While I do in principle like the idea of teaching methods, other than one-way frontal teaching, I was wondering if you could elaborate further on what the "battlefield in the class" would look like. Whether or not the nature of any kind of debate in the class will be pluralist or not still depends on what "the study of fundamentals at home" implies. What would these fundamentals be? If the material is very narrow/mainstream, the discussion in class is likely to be so too, no?

Whilst Masters' "students' inquisitiveness and creativity" might "automatically" ensure pluralism, Im sceptical as to whether this applies at undergraduate level. One of the reason mainstream neoclassical economics is so damaging in business or public life, is that many economics undergraduates study the subject for its earnings potential rather than out of intellectual curiosity or the pursuit of truth

This sounds sensible then, insofar as teaching styles other than one-way frontal teaching may do a better job at encouraging students to think more critically and independently, instead of merely making them repeat after teachers during exams. Independent and critical thinking seem crucial for progress in any discipline or field of work.

The argument for or against pluralism has nothing to do with the teaching style being used. If a teacher does not express him/herself in a way that students like, the subject matter carries far less importance in the students' minds.